Having dreamed up the first and best post-legislation book on Web Accessibility, and been cited as having "been
influential in promoting web standards", I’ve obviously got an interest in the Accessibility debates, but had been out of the game for a while. But in addition to my new job, I’ve got myself a consultancy gig looking at the UK Disability Discrimination Act compliance of a friend’s new company site.

“There’s so many useless decorative nested tables, it looks like the aftermath of a nuclear strike on an Ikea warehouse.”

It’s an interesting, and I suspect rather typical corporate site: content owners publish through a browser-based CMS, and I must say that on this one, they do an excellent job. Without training – and remember, these are writers, not HTML monkeys – there is alt text for images and intelligent text for links. Unfortunately, that’s all that they have privileges to do; the main structure of the page is beyond their control, as it was made by a large web design organisation who didn’t know their arse from their tits. There’s so many useless decorative nested tables, it looks like the aftermath of a nuclear strike on an Ikea warehouse. Each page has exactly the same 43 links before the main content, and no "skip to main content" link – so imagine tabbing through all those, or hearing them read by a screenreader! It would be enough to give you a paranoid belief that you were being stalked by Stephen Hawking, or that a Dalek is trying to hypnotise you.

But the worst, very worst aspect is the use of pop-up windows that are triggered by a JavaScript onclick with no provision to degrade to a good old-fashioned href if those naughty customers fail to have exactly the same browser set-up as the designer. It makes those links completely inaccessible to users of screenreaders, or PDAs or mobile phones. This is a major sin.

In fact< , I can exclusively reveal that in my copious spare time, I have decoded the Voynich Manuscript and discovered it to be an account written by the 16th century alchemist John Dee, describing how five hundred years before Al Gore invented the Internet, Satan used JavaScript pop-up windows to transport himself from Hades to earth in order to appear to his minions, drink blood, kill kittens and wreak his terrible vengeance upon the world! And I I say this without risk of contradiction : if you use non-degradable JavaScript pop-ups, you are helping the Anti-Christ!

In which I rant more soberly ..

I’ve a serious point to make, though. I expect an amateur making websites for beer money with FrontPage to ignore the development of Web Standards and Accessibility techniques that we’ve seen over the last four years. But not a large technology contractor.
And it’s no use blaming the customer; they have their own business to attend to – that’s why they contract the code development out. A hospital needs to know the latest developments in medicine, not best practice web design. A bank doesn’t want to think about the linearisation of tables; it wants to concentrate on its core business of loaning billions of dollars to lunatic dictators so they can build luxury palaces and repress their population with expensive western-made helicopter gunships.

Imagine if university chartered an expensive architect, who went away designed a building and then said, "Oh, I didn’t realise the law requires wheelchair ramps, and you didn’t tell me. Anyway, $500,000 please." It would be unprofessional and inexcusable if that happened – and is equally so if a Web Design house does not know how to comply with the Disability Discrimination Act, and doesn’t advise its clients of the necessity to do so. Personally, I hope that something like the Guild of Accessible Web Designers can act as some kind of accreditation, to distinguish the clued-up from the charlatans, especially as we approach the deadline for implementing part 3 of the DDA.

Protect yourself from accidentally being evil, with Dan Cederholm 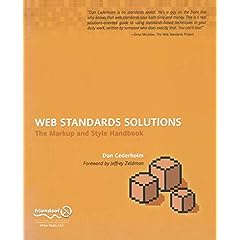 In addition to the new job and the Consultancy, I’ve been reading a new book by Dan Cederholm, called Web Standards Solutions: The Markup and Style Handbook. I’ve no connection with it, other than my mate Mills commissioned and edited it, but I have to say it’s excellent. A colleague read a chapter and pronounced it "the best and most lucid explanation I’ve ever seen of when to use <b> and when to use <strong>" and I agree; in the next few weeks I shall be putting into practice loads of his tips. I’ve already fancy-Dandified my header styles, removed presentational <br /> tags, and made them sleeker than Lisa Kudrow rolled in yoghurt. I will be marking up more semantically from now on. I understand the benefits and need; I always wanted to – just didn’t know how to do all that CSS wizardry. This book shows how.

His tip on using the same css and specifying whether it’s a 2 or 3 column page via an id on the body tag is likely to lead to a 40 foot statue of him being erected in the centre of several metropolises. I have to carry the book in a briefcase to protect myself from attractive women trying to seduce me because of it … and any one of those women could be the devil in disguise, summoned by a state-of-the-Ark web designer’s pop-up window. The threat is real. No exaggeration. You know me.