Having once upon a time been a musician, listening to music makes me happy – and, if it’s live music, even happier. So the lucky coincidence of being paid for a redesign and getting two consectutive nuptial late-passes (my stock is high due to not smoking for 4 months) meant I went to see the odd juxtaposition of folk-chick Kate Rusby and Metal gods Conquest of Steel last week.

Rusby is a “new wave of British trad folk” musician, and I generally dislike folk music. While I’ve enjoyed playing in folk clubs ( love the way people actually listen, and ask “what did you mean by that lyric in the second verse”), I’ve never enjoyed arran sweaters and “A pretty maid I did espy/ With a hey nonino no no”. But Rusby isn’t like that at all, and I’ve been rather smitten with her music for a year now. She’s got a northern-accented pure voice that can bring pathos to old songs and make her original material seem simultaneously modern and timeless.

I’m surprised that the group on stage aren’t billed as the Kate Rusby Band, as they’re certainly completely cohesive unit. Rusby’s husband, John McCusker is a fantastic multi-instrumentalist, and all of the band play excellently. They also gel in a way that suggests they’re all really good mates having a great time. Certainly, from the anecdotes and chat in between numbers while the band re-tune, you can see that you’ve got a group of totally committed professionals who love what they’re doing.

The inter-song chat is another splendid aspect of seeing Rusby’s band live. This is the kind of music that I’ve seen best performed in pubs with a small-room intimacy between performer and audience. The gig I saw was sold-out, and must’ve held at least 2000 people – most of whom were, Rusby said, invisible to the performers because of the stage lighting. Yet she and the rest of the band interacted with the audience and each other as if they were in a small pub playing to friends.

The music was tremendous. I wish I’d been able to take Marina (but it was a school night), because they played the 1686 ballad “Sir Eglamore” and Rusby’s own composition, “William and Davy”, both of which Marina loves singing along with in the car when we’re off to Tescos. A fair few songs from the new album were played, along with other favourites of mine (“Let Me Be”) and the encore of Rusby playing her own composition “Underneath the Stars” solo literally made the hairs on my arms stand on end.

This woman and this band deserve to be huge. A fine, fine musical evening.

“Steel” are a somewhat different lot. Not a parody like Spinal Tap, but more like an affectionate injoke between mates, they play 80’s style “heavy” metal in all its ludicrous, sexist cock-rocking glory. From stage parephenalia consisting of skulls, swords (and a child’s hobby horse) to denim jackets embroidered with Judas Priest, Whitesnake and Iron Maiden patches, they look the part. Songs like “Priests of Metal” and the sensitive we’re-not-sexist-honest ballad “Wenches Can Be Warriors” means there’s plenty of tongue-waggling, boot-on-the-monitor retrometal action going on.

The genre isn’t really my cup of Jack Daniels, but their drummer is an old mate of mine, Chris Mills, and they were playing in a scuzzy Birmingham club that hasn’t been refurbished since I saw Thee Hypnotics there in 1991, so I went down with a mate and had a great time. If that kind of music is your kind of stuff, definitely go and see Conquest of Steel: they’re loud, proud and Satanic. And from the female head-banging going on, they’re absolutely correct: wenches can, indeed, be warriors. 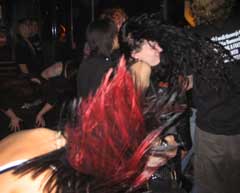 Yeah, OK, the girl on the left isn’t headbanging. But she is strikingly pretty, which merits her inclusion. It’s *my* website, OK??!?

One Response to “ Gig reviews: Kate Rusby, Conquest of Steel ”

Excellent review of Kate Rusby gig’I have seen her at least one a year since 2000’An exceptional talent.
However i fear she is now getting too popular’ the gigs are not as good as they used to be.
Regards
Jim