My daughter’s Easter holiday homework was to design and make a commemoration cake. Like most of her class, she had planned to make an Easter cake, until the day when Margaret Thatcher died.

She researched her life and found a graph of unemployment figures during the Thatcher premiership which resembled the letter “M”. Add a swift “T” for the initials of The Great Helmswoman, the dates of her life in icing over a home-made Victorian values sponge and we have an edible commemoration of a true “Let them eat cake” politician. 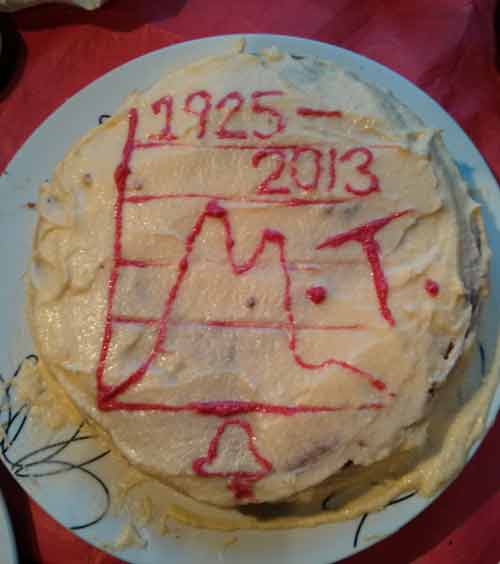 My daughter felt it important that the cake be entirely factual. There were other graphs and statistics we considered, many of which contradict the hagiographies that are being circulated by the right wing at the moment.

For example, her Right To Buy scheme turned the UK into a nation of homeowners, we’re told. Actually, a third of ex-council homes are now owned by rich landlords rather than their occupants. Because councils were forbidden from building new housing with the cash they received from selling their old houses, we now have a huge housing problem, with many young people unable to leave home at all.

It’s a similar story with the utility privatisations which were to make us a nation of shareholders and participatory capitalists. “Small British shareholders have no influence over the overwhelmingly non-British owners of the firms that generate and distribute power in Britain.” writes the London Review of Books:

when local electrical engineers dig up the roads in London, they’re working for East Asia’s richest man, the Hong Kong-based Li Ka-shing … In north-east England, they work for Warren Buffett; in Birmingham, Cardiff and Plymouth, the Pennsylvania Power and Light Company; in Edinburgh, Glasgow and Liverpool, Iberdrola; in Manchester, a consortium of the Commonwealth Bank of Australia and a J.P. Morgan investment fund.

Like the American neo-cons she was so friendly with, her fiscal policies were laissez-faire but she believed in government small enough to fit into the bedroom. She was deeply socially conservative and enacted the shameful Section 28 legislating that a local authority “shall not intentionally promote homosexuality or publish material with the intention of promoting homosexuality” or “promote the teaching in any maintained school of the acceptability of homosexuality as a pretended family relationship”.

You might believe the way she treated striking miners was justified, but her contempt for the working class is demonstrated by the Hillsborough cover-up.

There was no economic miracle: British GDP has grown in line with Germany and France, neither of which had the twin blessings of North Sea oil or Thatcher.

Statistical analysis in 2012 shows Britain has some of the lowest social mobility in the developed world; only Portugal is more unequal with less social mobility:

Yes, yes, Thatcher stopped the unions “bringing the country to its knees”. Then she delivered it to the bankers’ exemplary stewardship. Her Big Bang city deregulation paved the way for casino banks with decreased reserves, so the financial crash could happen.

If only her legacy were as easily swallowed and as quick to demolish as my daughter’s delicious cake.

3 Responses to “ A cake for Thatcher’s legacy ”

Kudos to your daughter! For the sake of factuality – did she add a pinch of salt 😉

Great cake from your daughter!

I guess the hyperbole was inevitable and part of a process that we must go through to put Thatcher’s time in office in context. The attempts to tackle overly bolshy unions (Callaghan’s comment from the time is revealing) and eventually bring down unemployment while avoiding inflation can be considered as necessary but, equally, the attendant and subsequent social costs excessive. I think Bruce provides a good overview of how reality failed to meet up with the rhetoric. Add to that: public spending didn’t fall.

The right-wingers will have to learn that, until they take Maggie of a pedestal, they will remain unelectable; and that, whichever political persuasion you are, is bad for democracy. And as long as the right seek to glorify her, the left will vilify. The fact is that individuals are rarely so important in history as pundits try to make out. There was a reason she was so unceremoniously deposed and subsequently not given media access: she was losing her marbles and it was starting to show.

I have to say that her cake is thefirst political cake I have ever seen. But it’s still sheer genius. This young Lawson will go far.