When I was a young roister-doister, I lived in a flat with my massive tomcat, Bagpuss. Bagpuss was a bit weird, as he was obsessed with water. Perhaps in a previous feline incarnation he’d been a Van cat. It’s all the more surprising considering that once, when he was a kitten, he’d jumped up onto the toilet seat to peer into the water and fallen in, head first. Luckily I was in the bathroom shaving and was able to pull him out before he drowned.

A common way for me to entertain him would be to turn on the tap just slightly so water would drip out once a second, and he’d sit next to the sink and attempt to bat the falling drips with his paws. This could keep him transfixed for an hour.

Here he is, with one of his lady admirers: 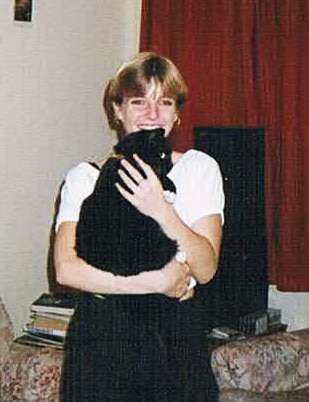 Once, however, his behaviour went from the quirky to the terrifying.

Picture the scene: I was lying in the bath, naked (as one does) when the door opened slightly and in came Bagpuss. He leaped up on to the edge of the bath to get a better view of the water, lost his footing and fell in. If you’ve ever seen a three feet long tomcat, flailing around in a panic with his claws extended fully, you’ll know to get out of the way. Now, imagine one on top of you, while you’re completely nude. It’s utterly terrifying. With one hand protecting the Bruce Juice Introducer™ and its accessories, I picked him up by the scruff of his neck and evicted him from the tub, and then had to spend 15 minutes soothing him before he’d let me turn the hairdryer on him.

I was a nervous wreck for days.

Massive? Fluffy? Obsessed with water? Sounds like you had a Maine Coon: http://en.wikipedia.org/wiki/Maine_Coon

Dear Bruce,
Please do not invoke images of your self naked and flaying around (whether with or with not a wet pussy) ever again.
Particularly do not use such terms as “Bruce Juice Introducer™” without first donating large quantities of money to mental health institutions (I have just donated to offset the pain and suffering caused by my usage).

Bruce, you do have a certain way of telling stories that makes them very entertaining reading 😀

Was that a Princess Diana haircut? Goodness me. Such a great look for my GF at the time. I saw her a few years ago and was surprised that she’d “gone curly”, at which she looked at me like I was the kind of neanderthal who didn’t understand ladies’ beauty processes, and explained that she’d always been so, and used to spend ages straightening it when I knew her.

I keep trying to forget that haircut, but it still haunts me.
So does the Bruce Juice Introducer…………..

Oi, Cynara! The Bruce Juice Introducer™ can’t haunt you – it’s not (quite) dead yet!