Last week, I was lucky enough to spend a couple of hours upstairs in a sweaty windowless room above a pub in Camden on a scorching summer’s evening.

The reason I subjected myself to this misery was to see a Japanese punky-pop-shoegaze band called Taffy play. Taffy are a bit like The Primitives, with chainsaw guitar and great pop melodies but also sport a shoegazey-disorted lead guitar and sweet vocals from a singer called Iris. Their drummer, an ever-smiling bespectacled chap who reminds me of Penfold from Dangermouse, plays like two drummers together. They might not be ground-breaking, but they do make a great, summery sound. They’re much too cheerful to be real shoegaze, and they’re better musicians and singers than Shonen Knife, with none of their studied wackiness.

Best thing to do is listen. Here’s their latest single “Tumbling” (but the best tracks from their new Lixiviate album, Sweet Violet and Train aren’t singles):

After paying my £6 to get in, who should I bump into but drummer Ken at the bar. As my 14 year old daughter is in love with him (“he’s so adorable”, apparently) she demanded by text that I have a photo taken with him. 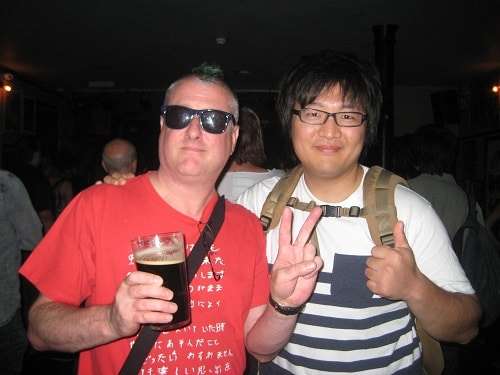 The photo was taken by the guitarist. They both signed my CD cover. Note that Ken’s autograph is a smiling anthropomorphised drum kit. (“It’s so adorable!” squealed my daughter.) I didn’t know what Iris or the bassist looked like to get their signatures, so lost my chance at a rare collectible there.

The band went on, and they were great. The sound was terrible, naturally: pub gigs never have a decent PA, the drummer plays loud to fill the room, the guitars turn up loud so they can hear themselves, and vocals are lost in the mix. Iris has a tuneful, engaging voice, but it’s quite high and not powerful. But they were brilliantly tight, and obviously loved playing. The bassist grooved around until his shirt was wringing wet, Ken flailed around on his drums, cleaning sweat off his specs between songs and never letting his smile falter. The guitarist even played an intro by hitting the strings with a glow stick.

As a band, they’ll either disappear or get really big and you’ll all be jealous of my seeing them in a room of 40 people in Camden. I think their tour finished tonight, but I heartily recommend their album. 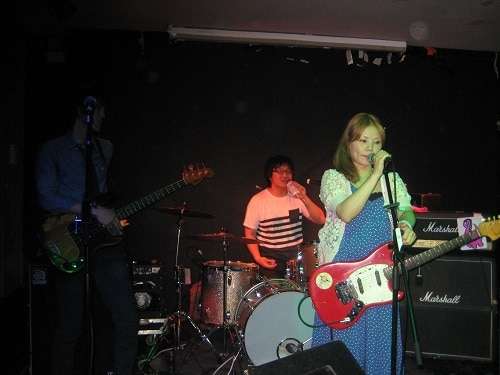