When I was clearing my dad’s house I found the VHS tape on which there was the only video of my band doing a gig. I don’t know who took the video, but here are five songs recorded in a tent at a festival in the West Midlands in 1991. The band are me (rhythm guitar, vocals), Tony Sherrard (bass), Andrew Cope (drums) and Nick Sherrard (lead guitar). We were called “The Lucies”. Here we are as a three-piece before Nick joined, with some hanger-on called John Peel. 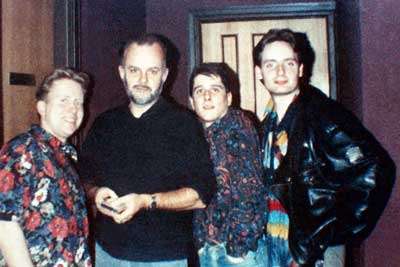 Silka walks in those evenings When you feel like you’re still a virgin.
You don’t trust your feelings, Silka’s certain she’s hurting.
She is dressed in lace when she says, “Yes, yes, I will; of course I will, yes” –
But if you feel the need to believe her,
remember – Silka’s in fancy dress.

Silka in black satin, like the Mona Lisa if she were in mourning.
You try to please her, then with no warning
There’s a pause for the sinful applause and your unsatisfying taste of success
and the knowledge of the flaws that you hate, then through the door
comes Silka in fancy dress.

Bejewelled in a shattered promise, she’s wearing fading fraying denim.
You’re pierced by inverted commas
that have appeared round the tales she’s been telling you for so long.
She’ll decree: “Everybody loves me”, but it’s too late for you’ve already guessed
Underneath there’s nothing that’s real to see; Silka’s only fancy dress.
Really, she’s merely fancy dress.
She’s very nearly Silka, wearing fancy dress.

Keep your mind and your eyes closed;
Silka’s wearing borrowed clothes
and all her cheap and gaudy trinkets.
Silka said she’s gonna crash; listen. Sing it.

Let no-one say The Lucies couldn’t rock out. However, accusations of leaving heavier songs open to extemporised guitar noodling and never properly rehearsing how to end them will be met with hands in pockets, eyes averted and shuffling of feet. “Dancing (Across a backdrop of Stars)” is a moronic heavy riff I wrote, with some vaguely psychedelic words I wrote after bring mightily impressed by a performance by the London Contemporary Dance Theatre. Words, music © Bruce Lawson

“Don’t Bring Me Down” is a storming bassline and tune by Shez, with some blahblah words from me about not harshing my mellow because “I’m lost, don’t wanna be found again” and “floating in colours and sound again” etc. It’s for this reason we were called “The Hallucinogenic Freedom League” (later abbreviated to “The Lucies” because no-one could ever spell the full name). There’s a studio demo available. Words, © Bruce Lawson, Music © Tony Sherrard.

This song – called “The Missionary’s Position” – is proof that a short satisfying riff repeated ad infinitum with jazz chords (F9 – E9- D7- A7, woo!), funk bass, wiggly wiggly heavy rock lead and a bluesy middle break doesn’t add up to a good song. Note Paul, the roadie/ soundman putting his spare wheel in front of the bass drum, as Andy played so hard his drum was moving away from him. Words, music © Bruce Lawson.

This last one is a ballad called “Sweet Sadie Sings”. It’s one of my favourite songs I wrote for The Lucies because (1) it has a nifty G add9 chord, (2) it has a shouldn’t-work-but-does F#m to F change and (3) because I remember who the real “Sadie” is. But what’s in a name if the name’s been changed?

Live, it suffers a bit from lack of variation – the studio demo has a sexy extra guitar line by Shez, the bassist. This performance got me dangerously close to being blacklisted by the Tortured Artists and Singer-Songwriters Association as I visibly, and publicly, smiled while singing it. Words, music © Bruce Lawson

Sadie sings sweetly
about all of the things she’s done
and says, “They can’t be classified neatly
into those I’ve lost and those I’ve won.
For experience gained
My innocence has been shamed.
until only empty words remain.”
Sweet Sadie sings.

Sadie sings softly
of the last twenty-seven times she’s been in love
and says “If you would only get off me
I could transcend this wrecked room and rise above
My stupid hopes and my facile fears
My futile dreams and my fatuous fears.
I never claimed that I was proud of these last three years.”
Sweet Sadie sings.

Sadie is grieving
for the dreams she’s nurtured and then denied.
She said, “One November evening
I took them out and I laid them bare and there they died.
I know that I am far too small
to contemplate ever achieving them all,
so on the way some of them fall.”
Sweet Sadie sings.

Sadie sings sadly
conscious of her words’ ambiguities.
She says “Who’s to say I’ve done so badly
when all I’ve ever really done is try to please?
For experience gained
My sense of wonder has waned.
What’s in a name when the name’s been changed?”
Sweet Sadie sings

Hi, I hope everything is well there.

I will recommend my son —that wants to learn how to play and sing at same time— this blog entries. Perhaps it would be easier to follow you than following the late Jack Bruce (that sings lower in tone, as mmy son does)

I live in Madrid and would love to hear you rant in Saint Cecilia’s day… maybe to classy for me to be in there. Anyway good luck.

PS 1. that confesses having used Audacity to record some things for my tube channel

PS 2. that dejàs-me Philippe Kahn (Borland days) presenting his products with the little help of his camera music friends.

PS 3. that acknowledges the accesibility —I work in a residence for handicapped– issues addressed somewhere there (the using of [article]?)

PS 4. that declares I would love to see a comments interface that would ellaborate on previous cooments and —besides showing me those similar paragraphs from previous comments— ellaborate a new machine comment that perhaps would be better than all previous comments, including mmy own.

PS 5. that confesses having javascripted a clumsy piece of code that retrieves paragraphs from a localHosted database with 3+ coincidences on words 5+ characters long, departing from the words in my user entry. And, confesses that woul love to see a last paragraph made by the machine with a sort of genetic algorithmic piece of code.