My recent upgrade to Yosemite appeared to go without a hitch, until I fired up Garageband to tidy up the guitar line on my cello and harpsichord-driven song Girl In The Room.

To my dismay, the cello and harpsichord samples had disappeared, to be replaced by a very clunky generic synthesiser sound. After some investigation, it appeared that the new OS (or new Garageband 10.0.3) had nuked the soundfonts I’d put in Library/Audio/Sounds/Banks/. Perhaps I should have known this – but I’m new to Mac, and my experience on Windows is that it doesn’t hose your data when you upgrade. Ah well. Apple knows best, of course.

But, once I’d got the soundfonts from a backup and restored them to the correct folder, I’ve noticed that Garageband doesn’t see all of them. Other times, it sees a soundfont, lets me associate it with a track and plays it fine. Then I hit play again and the same track I heard seconds before is entirely silent although the dialogue box still claims the soundfont is associated with the track. (and what is a “user define bank”? User-defined, surely?) 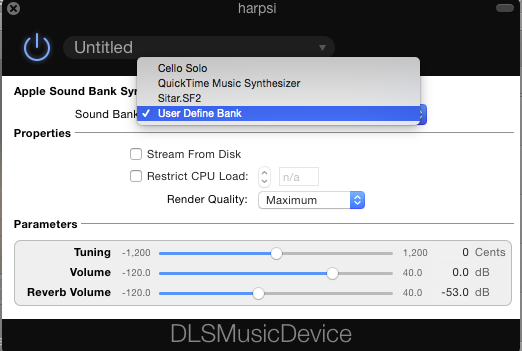 This basically means Garageband isn’t usable for me with soundfonts (which was the whole purpose of my buying it; I don’t want to be restricted to the excellent-quality but rather middle-of-the-road default samples).

But I’m a Mac/ GB n00b and am probably missing something obvious. Anyone got any advice?

You have my word as a complete stranger who for some reason got a link to this page in an email from Twitter!

10.0.3 is virtually a completely new OS. Apple does this from times to time. It trashed a lot of things on my machine: system preferences kept telling me it wanted to change something but I couldn’t open it. Likewise I couldn’t see the chat window in Colloquy. There could be more but my machine was nicked.

Logic Pro X all the way

Thanks for the advice to go to Logic Pro X. The trouble is, my confidence in Apple has taken a huge knock. Will they remove/ break such an important feature in software I’m paying £149 for?

Apple has a very good reputation when dealing with certain professional groups and providing excellent long term support. Unfortunately, while quality assurance remains excellent there have also been several recent examples of them breaking or dropping stuff without looking back as both Adobe and Cubase can testify. The increased focus on consumer and lifestyle products makes this more visible. That said, Logic had a large customer base before it was bought by Apple and would probably survive being spun out. Garage Band may well go the way of many of the pet inhouse projects.