In 1994, my brother and I had Christmas in Kovalam, just south of Thiruvananthapuram, Kerala as a break from our 5 month railway trip round the perimeter of India. One of the most memorable sights was the Balloon Man of Kovalam. He was a long-term guest in the Guest House we stayed at, and was a very tall, forbidding American who looked just like Kilgore from Apocalypse Now, and was reputed to be a vietnam vet living on his disability pension writing reams and reams of weird poetry about numerology, death and Hindu mythology.

Every evening, just before sundown, the Balloon Man (real name: Buck) would stand on a rock on the seashore, facing the horizon, and inflate balloons and release them, while chanting and singing. Sometimes, he would tuck a long balloon into the back of his shorts like a tail, and scamper around like Hanuman, much to the delight of the local children who followed him around adoringly.

I gave him my address and he sent me 3 or 4 self-published books of poetry and doodling; last I heard he’d left India and was in Prague. Here he is on Christmas Day, 1994: 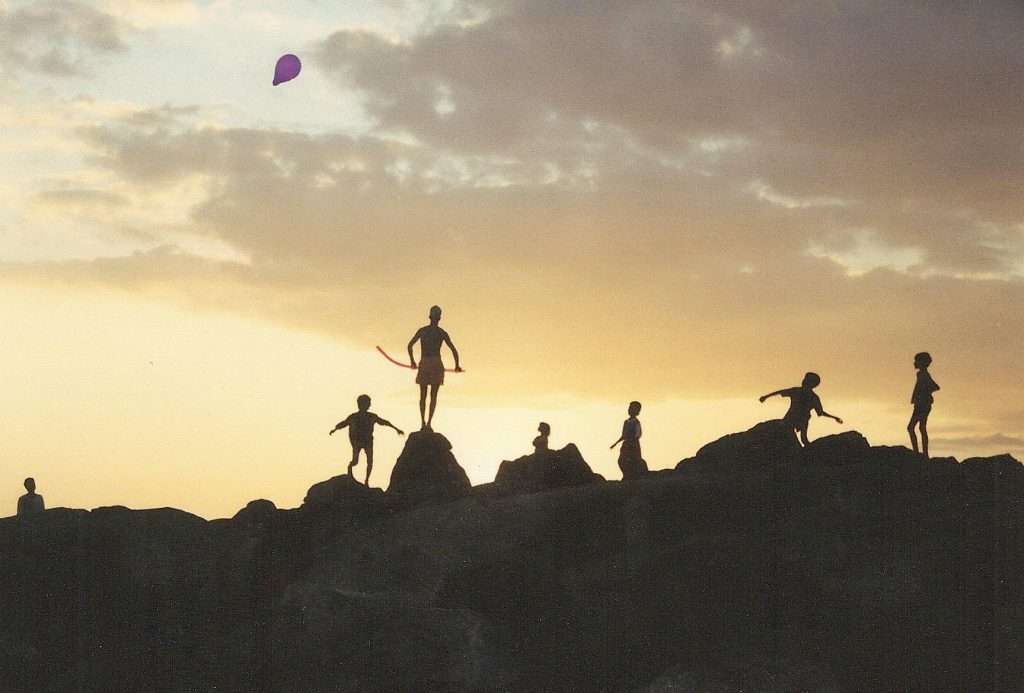 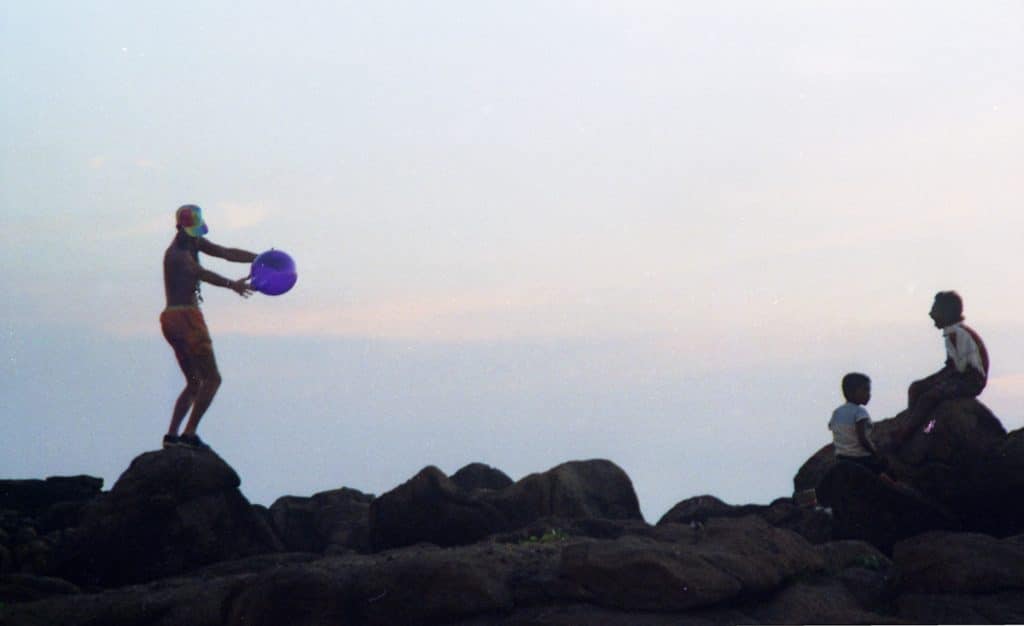 Done with my band The Lucies – our first ever attempt at recording. Shez on bass; Andy Cope on drums, me on guitars and vocals. Mark Ponsford guested on piano. I wrote it about getting to know a girlfriend at the time, and spending ages in conversation through most of a summer but somehow not really managing to say what we felt.

Centre Stage is Julie; in prompt corner’s Bruce.
I say I love you truly but you make a poor excuse.
We’ve listened to your records by the New Kids on the Block.
the conversation’s drying up, the intimacy’s lost –
and what comes next?
Won’t you come round for a little while and we can get together.
Won’t you come round for a little while? We’ll talk about the weather.
Did it rain on your holiday? There were blizzards during mine.
Metrological conversations help to fill the time.

You put on airs and graces and I put on a tape.
you cower in the corner like I’m contemplating rape.
Did you see that programme on the TV last night
about the duck that’s learned to skateboard and the monkey that can write?
So what comes next?

We’ve talked of quantum physics and the duality of man
and how you’ll trade your Mini in for a supercharged Trans-Am;
poetry and politics; do you think God is real?
We’ve told each other what we think but never what we feel –
and what comes next?

And I’ve got to say, that we must make hay
’cause the sun won’t always shine.

It was my birthday a few days ago, and so Nongyow made me one of my favourite dishes – a big plate of spare ribs. As I sat munching my way through them, kitchen roll next to me to mop up my chin, shirt, hands, back of my neck – anywhere and everywhere splattered by the sauce – I remembered a time in 1999 in Bangkok when I had a meal of Spare Ribs at Suan Dusit Royal Palace with the wife of the Crown Prince, Her Royal Highness Princess Somsawali.

The boss of Amnuay Silpa School where I worked had been asked to provide private lesson to the Princess’ adopted 8 year old daughter, BaiPhlu, and I’d been asked to do the teaching. I was picked up by a car driven by a military man, and taken to the Palace, and asked to wait in a beautiful old room before meeting the Princess. When she appeared, my boss got down on the floor and gave the ceremonial wai greeting; being a westerner (and completely overwhelmed) I stuck out my hand to shake her hand – a major breach of etiquette.

Anyhow, she was great; completely without pretension and asked us to stay for dinner. Staggeringly, I managed to mind my Ps and Qs, even with BaiPhlu under the table trying to goad me into a funny-face competition. The hardest part of the whole meal was trying to eat spare ribs quietly with a knife and fork. I challenge you to try it; it’s impossible. The racket I made didn’t deter the Princess, who had me teach BaiPhlu for a couple of terms.

The picture above is me, by BaiPhlu. I had different hair, then. And I was red. Here’s Her Royal Highness Princess Somsawali when she came to the school to inaugurate our language centre. In Thai she’s called “Phra Ong Jow Somsawali Phra Wora Racha Ti Daa-Maat” or “Phra Ong Som” for short. 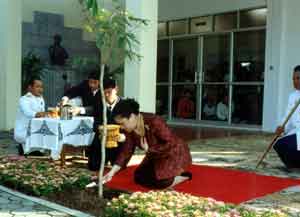