Perhaps the funkiest, happiest song I’ve ever written. The tune and first verse were written while I was at university, and forgotten. Then a friend said two weeks ago “I guess I’m falling in love” while we were discussing her nasty bout of the unrequiteds. I remembered the song, wrote the rest, recorded it last weekend and mixed it yesterday with the help of Shez, my old friend and bass guitarist. A mere 27 years from conception to completion.

The bass was recorded in one straight take (the 57th take, to be precise). I wanted it tense and urgent, after Amy Lowell’s poem Vernal Equinox — “Why are you not here to overpower me with your tense and urgent love?”.

Four and a half years ago I was moaning (me!) about the state of Installable web apps and interoperability (TL;DR: laughably crap). Everybody listened to me, and made them better. Well, actually, they didn’t, because I was wrong; I still believed in the notion that it was a good idea to download a static snapshot of a site, thereby losing all the immediacy and linkability of web publishing.

At their simplest, Progressive Web Apps are application-like things hosted on your web server. If you’re as old as me, you might call them “web sites”. They also point to a manifest file, which gives some light metadata about icons, default orientation and the like. In conforming browsers (currently, Opera for Android, Chrome for Android and, forthcoming, Firefox too) you can “save” the app to your homescreen. The relevant icon from the manifest is placed on the device’s homescreen which can then be tickled into life with your digit, indistinguishably from a native app: over HTTPS, if you so define it in the manifest, it can open in a default orientation and with no browser UI; with Service Worker, it can work offline.

Crucially, in browsers that don’t support it, you have a normal website. It’s perfect progressive enhancement.

There are differences in implementation; Opera and Chrome are working closely to see what works best. Opera’s implementation currently differs from Chrome’s in four main ways:

Opera is still experimenting with heuristics (and Chrome are tweaking, too). I’m convinced by Stuart Langridge’s argument that requiring “repeated engagememnt” may slow adoption:

Native apps get to say “install our app” without providing a link, a QR code, whatever: people know how to do that… [with Progressive Web Apps] I still can’t say it, because you have to come back twice over two days. How popular would Clash of Clans be if you couldn’t install it until the second day you played it, I wonder?

[Note that since Stuart wrote this, the criteria for “engagement” by a user in a site changed from twice in two days into twice, at least 5 minutes apart.]

I think there should be a mechanism for discreetly — unspammily — alerting a user that a site is a Progressive Web App on first visit. But I’m not King of Opera for Android; however, I know the man who is (Andreas Bovens).

But how good are Progressive Web Apps, anyway? Is it even possible to write a really good app using web technology without the Reactembengular Framework?

Nolan Lawson (great name, great guy) has written Pokedex.org: a progressive webapp for Pokémon fans and blogged about it in detail (it’s a fantastic blog post; I urge you to read it). Nolan writes

I am super excited about this app, because it demonstrates that you can build an offline, 60FPS mobile app using *only* web technologies. Of course it’s offline-first (PouchDB, LocalForage, ServiceWorker, Cloudant), so you can browse all your fav Pokémon without a connection.

I’m super excited, too. Soon, this will be possible on all three cross-platform browsers. It’s also possible to add tell an app to be homescreen-able in iOS. No news from Microsoft, but they’re doing good things with the W3C Manifest in their manifold.js.

Want some web standards retro fun? Go to this Inbox Attack game in Opera for Android, add it to homescreen (the + button in the URL bar) and then tap its homescreen icon. It’s made with manifest, SVG and the vibration API.

If you’re interested in making a Progressive Web App, here are some resources to get you started.

Go forth and make great apps that don’t require installs or updates, are of the web, with URLs and which are progressively enhanced. Hurray!

For those who don’t know, “a11y” is short for “accessibility” — the practice of ensuring web sites (and apps) are usable by people with disabilities.

Anyway, Heydon Pickering, a chum of mine from Bury St Somerset O’Groats in rural England, has collected some music made by people from the accessibility (and wider web standards) world, and is selling an album of it for £3, all of which will go to two worthy causes: NVDA, a free open-source screen reader to help people with visual disabilities access the web, and Parkinsons UK.

The track list is pretty varied, from novelty to folk to psychedelia. There’s even a song by me on it, called Imprecise and Infrared, which Heydon described: “Your song has been stuck in my head 4 days out of 5 for the last four months, you catchy fuck.”

It would make a lovely Xmas prezzy, and owning it will make you (up to) 74 times more sexually desirable. So why not buy it?

Locked in this box
I have a seashell
that whispers to me
of white foaming surf and starfish,
of sirens and islands,
of sails and whales
and a voyage to see
a ballet of almond trees.

When there is no melody to be heard,
when this silence crushes,
I listen to my seashell —
it reminds me how to sing.

And I can smell oysters and dead fish;
And I can hear the wind groaning in the rigging;
And I can touch seaweed slime and driftwood;
And I can taste salt spray on my lips.

Then I hide it in this box, away, again.

Here’s a video of a keynote talk I gave on Friday at Velocity Conference, Amsterdam. It was my last conference talk of the season, and the end of 4 weeks on the road.

I’m quite proud of it, for a number of reasons; firstly, because I was nearly sick with nerves but I look quite relaxed. (Look at how many people were there – and this is only half the room! Photo by Scott Jenson) 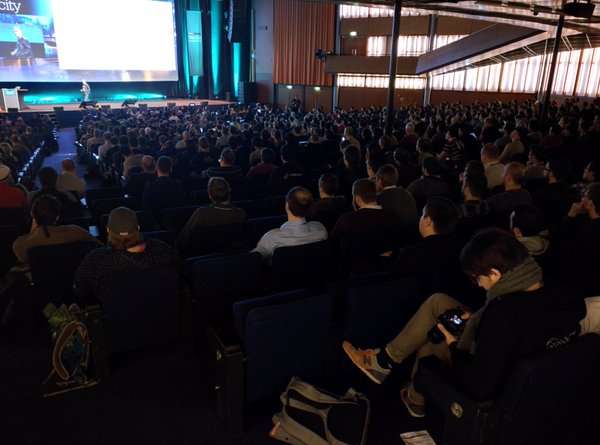 The second reason I’m pleased with it is because it explains why I (personally) do what I do. I was born in Yemen, lived in Africa and Asia and lament the Western-centricity of so many organisations, which manifests in their websites. It took a great deal of research, but it was worth it – some of the numbers, demographics and facts startled many audience members, and made a fair few of them realise that it truly is a worldwide web, not a wealthy western web.

Many people came up and expressed shock at the image of the true size of Africa. When people hear that the United Nations predicts the population of Africa will increase from its 1 billion now to 2 billion by 2050 and peak at 5 billion in 2100, they have visions of some Malthusian mass-starvation catastrophe. But, because of the Mercator Projection, few realise how damn big Africa is. For a fascinating and encouraging look at population trends, I thoroughly recommend Dr Hans Rosling’s 1 hour presentation Don’t Panic – The Facts About Population. It’s entertaining, evidence-driven and deeply, deeply humane.

There’s a 5MB PDF of the slides, too, containing links to resources. I also wrote an article Making websites that work well on Opera Mini.

Here’s a song I started writing in Pokhahra, Nepal, under a skyline dominated by the Annapurnas (hence the Nepalese temple bell sample), while thinking about childbirth: how the delivery of my kids felt like a miracle, yet it’s so commonplace – millions of babies are born every year.

Then I thought about the unconditional love one has for one’s kids, and then the ordinary miracle of feeling love for anyone. So it’s about all of that, and joy and sorrow, related hippie bollocks, and mountains too. I love the sea, and I love mountains.

The second verse was completed in March this year in Barcelona. I’d hoped to have it recorded and mixed before my friend had her baby, but a month of travel prevented mixing and he was born at the weekend. Hurray!

Title suggested by Brian Patten’s Fruitful Lady of the Dawn.

It’s for you, please don’t think twice.
No words are wasted in this offering;
Take it now; no sacrifice;
freeing me, it’s freely given.
These gifts won’t fade;
It’s renewed every day

This may seem commonplace and unremarkable –
it’s the ordinary miracle:
Mundane, banal and trivial;
Comic-fodder for the cynical.
I give my unconditional love to you.
I do.

I never saw a clearer moon
from the Annapurnas to the Pyrenees.
I hope you don’t learn too soon
that freedom that is granted doesn’t set you free.
This light will glow –
I hope you see it when you go.

It’s for you – hold out your hands.
I’ll waste no more words in this offering.