What a week, eh? Some people called Kanye West and Kim Kardashian had a baby, and Instagram announced 15 second videos. And if that were not exciting – nay, dispruptively paradigm-shifting game-changing enough – check out these hot links!

in order to avoid any more embarrassing mix-ups between George and Jeffrey, here’s a cut-out-and-keep briefing. 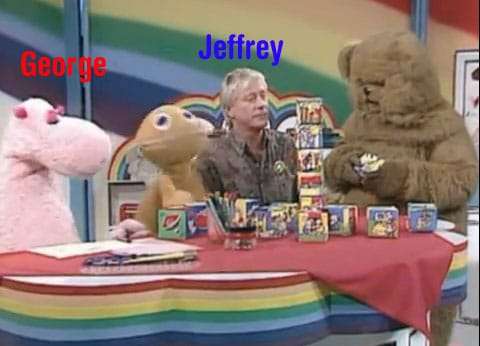 George is the giggling pink-faced dullard.

It’s five years since I began work at Opera, the plucky Norwegian browser maker. Despite this appalling handicap, Opera’s gone from 48.6 million users in June 2008 to over 300 million users.

Doing my job, I’ve co-authored a book and had the privilege of visiting India, Indonesia, Japan, Australia, Netherlands, France, Spain, Russia, Poland, Bulgaria, Germany, USA, Czech Republic, South Africa, Denmark, Sweden, and (of course) Norway, and met some of the cleverest people in the industry.

I’ve gone from being a man who forced a corporate website to behave itself in IE6 every day (with only Firebug as my sword and a couple of forums as my shield) to someone who rarely makes full websites any more, but reads billions of emails about the next tranche of fascinating standards that take the web to new, ever more-powerful ubiquity.

And they give me money to do it. Mad buggers.

On Thursday, I travelled down to the swanky Mozilla offices in London to an open invitation to meet the W3C Technical Architecture Group (TAG), who were in town (presumably for this week’s Bilderberg meeting). I’ve met many of them before, and they’re all jolly good people, but I’d never met them as an entity.

I’d lugged my laptop down to take notes, as I’d anticipated some sort of relaxed presentation and then a public Q&A (by “relaxed” I mean, not live streamed and in front of the small 30-strong audience enjoying Google’s beer donation). It was unstructured, however, with TAG people mingling around and presumably answering the same questions repeatedly. (I’ve given this feedback to the co-chair, Dan Appelquist, already.)

I asked “What does the TAG do?” after Dan introduced the evening. Dan and TimBL answered that the TAG is an oversight body that ensures W3C specs kind of cohere, and kind of stay within the Architecture of the World Wide Web that TAG defined. Jo Rabin followed up with the question “how does TAG measure its success?” to which there was a less definite response. (However, the Web continues to do rather well, so arguably they haven’t broken anything.)

It’s good that the TAG want to meet developers. Tag member Jeni Tennison asked me what my pet peeve with the TAG is. I answered that there isn’t a representative of jobbing web developers on the team. Sure, there are some people who represent browser vendors on the team, but people like me don’t make web sites every day any more (if they ever did). I’m starting to feel that although lip service is paid to the needs of developers in the Priority of Constituencies, it’s pretty hard for a developer to get his/her voice heard.

working in web standards is incredibly frustrating. It involves no small amount of interaction with people who seem to have graduated from the Hacker News Commenter School of Diplomacy. We “authors” don’t hold much weight in standards discussions; at least, nowhere near as much as browser representatives do.

Now, do I think more full-time designers and web developers should get involved in standards, after all this glowing endorsement? Absolutely. The fact is, we don’t have the kind of voice we ought to have because we’re not there. “Author preference” is very often used to argue for or against something in a standards discussion, but very few of us are around to agree or disagree. We’re a talking point more than we’re active participants.

The question is, what to do about it? Six years ago, the CSS Eleven announced with a fanfare that it was an organisation “committed to helping the W3C’s CSS Working Group to better deliver the tools that are needed to design tomorrow’s web”, made itself a lovely website and then promptly disappeared. I’ve certainly heard from developers and designers that it’s hard to do a full-time job, keep up with all the new developments and get actively involved in the time-consuming minutiae of standards development.

I don’t know. What do you think?

I lived in Istanbul for a couple of years and love the city enormously, so have been glued to the coverage of the Istanbul protests (revolution?) over the last few days.

It started out as a peaceful sit-in by some citizens who were angry over plans to redevelop one of the few remaining green spaces in the city (the population of which has increased tenfold between 1950 and 2000). Heavy-handed policing brought more people out into the streets. This cartoon (circulated by a Turkish friend) illustrates this well:

When I lived in Turkey (in the mid nineties) the police were a law unto themselves. Every month they’d come to the bar where we English teachers hung out to demand on-the-spot “fines” for our not having passports (they knew that the passports were taken away for weeks by the grindingly bureaucratic work permit authorities). When a bomb planted by the PKK (Kurdistan Workers’ Party) exploded, my Kurdish girlfriend hid in the house for a week; she explained that the police would beat or rape local Kurdish people. Forced virginity tests were common.

So what do the protestors in Istanbul, Ankara and Izmir want? It seems (bucking the comfortable Western narrative) that this group of young muslim people aren’t reactionary zealots. Sumandef, a Turkish woman writing in English on her blog post What is Happenning in Istanbul? says what many of those interviewed on TV and friends of mine say:

By so called «complaining» about my country I am hoping to gain:

Freedom of expression and speech,

Control over the decisions I make concerning my on my body,

The right to legally congregate in any part of the city without being considered a terrorist.

To all who are protesting in Turkey (or anywhere else) against authoritarians who wish to tell us how to live our lives, I wish you safety, and success.